Tonight
Mostly cloudy during the early evening, then gradual clearing, with a low around 9. North wind 5 to 7 mph becoming calm after midnight.
Wednesday
Sunny, with a high near 31. Calm wind becoming south southwest around 6 mph in the afternoon.
Wednesday Night
Partly cloudy, with a low around 25. South wind 6 to 10 mph.
Weather forecast provided by weather.gov.
Search
Main Navigation 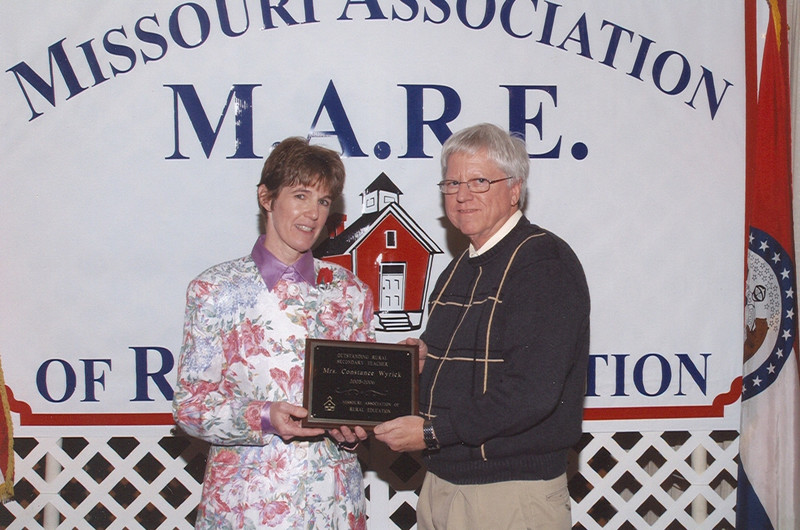 Connie Wyrick has been educating young people in the Miller Co. R-III School District for the last five years.  Mrs. Wyrick's teaching experiences have been focused in the area of the general science program as well as numerous advanced classes in science.

Connie has been described by one of her colleagues as a genuine person who overlooks where you come from and what you wear to see the potential for everyone.  When someone tries to describe Mrs. Wyrick to other people words such as "exceptional," "incredible," and "amazing" litter the conversation.  When students are asked to describe her, they use such words as "cool," "trustworthy," "understanding" and "passionate".  She is not only an exceptional science teacher that uses inventive ways to get concepts across to the students, but through actions and deeds is able to reach out across the educational community to parents and peers.

During her teaching tenure, Mrs. Wyrick, has participated in many National, International and State activities bringing recognition to herself and to her students.  In 1990, Connie was selected as Teacher of the Year.  She has served as co-director of the Missouri Academy of Sciences, has received the Presidential Award for Excellence in Math and Science for Missouri in 2003.  Most recently she received the Missouri American Water Research Teaching Award for 2005.

Many of Mrs. Wyrick's students have learned not only the importance of knowing the information but that they also must learn to work as a team, with a variety of individuals and to think for themselves.  To her acclaim, over 20 students have presented projects at the State Academy of Science, with one student advancing to the National Academy. Four students were selected as Eagle Award winners which denotes top in the state for the Academy.  Over 20 students have presented projects at the Junior Science, Engineering and Humanities Symposium.  Of those students, nine advanced to Nationals with two students advancing to the International level  held at the London Science Youth Forum last August.

The implementation of a more hands approach, one group of students experienced the scientific process by marching through the tall weeds to a local fishing hole, presenting them with five types of bait, and then lead them through forming a hypothesis, testing it, and forming conclusions.

Her energy is boundless, displayed in instructing her students.  She is forever positive, uplifting her students, whether it is a well placed 'good job' for a tough basketball game or an encouraging hug and a friendly smile when a student needs encouragement.

Indeed, Mrs. Connie Wyrick's recipe is to mix in some fun, a lot of hard work and you get top results making her the Missouri Outstanding Rural Secondary Teacher for 2006.