Current conditions as of 25 Jan 16:56 pm CST
Tonight
Mostly cloudy, then gradually becoming clear, with a low around 9. North wind 5 to 7 mph becoming calm after midnight.
Wednesday
Sunny, with a high near 31. Calm wind becoming south southwest 5 to 7 mph in the morning.
Wednesday Night
Partly cloudy, with a low around 25. South southwest wind 6 to 10 mph.
Weather forecast provided by weather.gov.
Search
Main Navigation 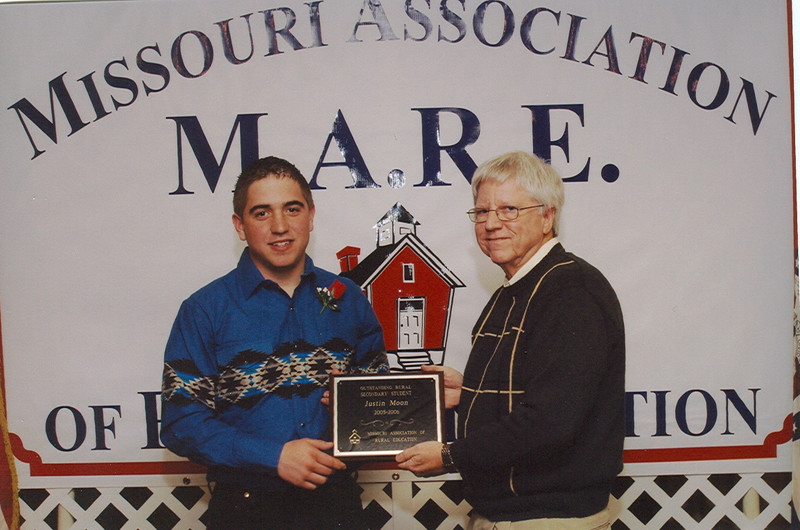 Justin Moon is a senior at Chilhowee High School.  He has attended the Chilhowee district since kindergarten and is described as your all around All American boy.  Justin always has a smile on his face and is ready to go to work on whatever the project of the day is.  He is a leader and leads by example.

Justin lives on a cattle and grain farm with his brother, mother, and father.  He knows what hard work is whether it is with the livestock or out in the fields.  Justin is the type of individual you can tell what needs to be done and then go about your day knowing that he has successfully taken care of the chore or task.

Justin is active in his community.  Along with his parents, he is involved with the annual Chilhowee Community Fair activities.  His involvement in the fair activities may include putting up the fencing for the youth rodeo or serving as an escort for the queen contest.  He and his brother Bryan, also are involved in antique tractor restoring and have a pulling team.   He has built his own tractor and enjoys taking part in the activities and tractor pulls with the Chilhowee antique farm machinery club as well as the Missouri State Fair.

Justin is active in many extra curricular activities around the school and in the community.  He is a member of the Student Council, the National Honor Society as well as  serving as a class officer.  Justin has also participated in Baseball, Quiz Bowl, Sports Club, FFA, and 4-H.  As an FFA member he has received awards including Star Greenhand, Star Chapter Farmer, Area Star Farmer and is a candidate for State Star Farmer.  In 4-H, Justin has taken on a leadership role by serving in different officer positions of the Chilhowee Indians 4-H club,  participating in all of the club's activities and in some cases, serving as the organizer of those activities.  His involvement in 4-H has allowed him to attend 4-H camp both as a camper and  as a counselor.

Justin Moon is an exemplary role model for both the students and staff of Chilhowee making him most deserving as the Outstanding Missouri Rural Secondary Student for 2006.