Tonight
Clear, with a low around 38. South southwest wind 9 to 13 mph becoming northwest after midnight. Winds could gust as high as 22 mph.
Sunday
Sunny, with a high near 50. North northwest wind 9 to 16 mph, with gusts as high as 28 mph.
Sunday Night
Clear, with a low around 31. Northwest wind 5 to 7 mph becoming calm in the evening.
Weather forecast provided by weather.gov.
Search
Main Navigation 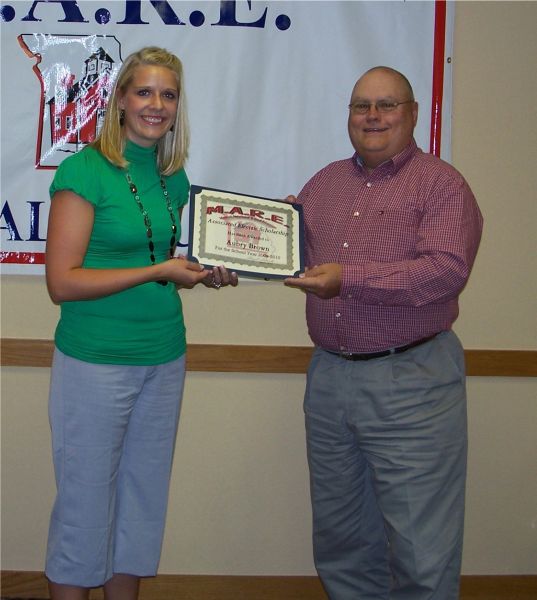 Aubry Brown is a graduate of the Jefferson City High School, Jefferson City, Missouri.  She is currently attending the University of Missouri - Columbia, Missouri, majoring in Elementary Education.

Following graduation from high school, Aubry attended Ozark Christian and later transferred to Crowder College in Neosho, Missouri.  While at Crowder she had the opportunity to live with a family in a rural community.  This gave Aubry the opportunity to work on a farm, and learn many valuable lessons.  She learned:

One of her college instructors shares that Aubry was always concerned about doing well in her classes; even more importantly, as a future teacher, she was interested in others being successful.  Her caring attitude toward others made her even more successful.

Aubry concludes, "But unlike the city mouse, when I went to the country I never had any doubts about my choice.  Living and teaching in a rural community is exactly where I am supposed to be."